Backstage in a faded Liverpool social club, seasoned cabaret diva and aspiring actress, Bev, prepares for her final ever gig.

While she awaits a life-changing phone call, Bev takes us on a hilarious journey through her rollercoaster of a career, introducing some weird and wonderful characters on the way; from cameos on Corrie, Christmas with The Krankies, booze-cruising on the Mersey, and even body-doubling for a monkey – Bev has done it all.

Starring Catherine Rice and Andrew Schofield, this new comedy two-hander lifts the lid on the world of show business, shines a spotlight on fame, and asks what 'making it' really means.

This production began as a sellout and award-winning one-woman show, 'Our Bev’s Christmas Cracker!' in 2018:

Audience reaction: "The funniest night out in years" "Comedy gold" "You cannot miss this show!"

“A lot of heart, soul and Merseyside wit” Liverpool Echo

Written by Catherine Rice and Stephen Fletcher- with additional material by Andrew Schofield.

One night, after performing in The Royal Court Christmas show, the whole cast sat at a table in the bar next door. Full of the usual post-show buzz, we pieced together the performance, replaying the highs and lows, who forgot what line and when, and enjoyed a well-earned drink.

This was after a two-show day. Both performances were sold out. The place was packed and the atmosphere was amazing.

A woman came over to the table and congratulated us, having had a great time watching the show. She couldn’t have been happier. She finished with the niceties and, with with her arms draped over the shoulders of two of the cast members, said, “Oh, isn’t it a shame, hey. You lot could’ve made it.”

There was a compliment in there somewhere, but as she wandered off, we looked at each other with some of our stuffing knocked out and got another drink.

There we were, in a sold-out venue, entertaining tens of thousands of people, and yet, to this woman, in her home city, having told us what a great night she’d had, believed we could’ve (or should’ve) been somewhere else- or assumed that we’d want to.

The next night we were five minutes into the show and a wall of laughter hit the stage. I was listening to it from the wings, and turned to my brother who was also in the show.

Quoting the woman in the bar and referring to  how much the audience were enjoying themselves, I said, “Mikey, listen to that. Who hasn’t made it, hey?”, and with that, he bent double with laughter, pointing at me.

I realised I was trying to make my point while stood on tiptoes, dressed in a red sequin-covered boiler suit, wearing a wig, and with my hand stuffed up the backside of a puppet hamster.

We all fell about laughing. Maybe the woman in the bar had a point after all.

To ‘make it’ in any aspect of life is subjective.

To make peace with your achievements or what you do with them is totally in your own hands and those who look on.

MAKING IT is a tribute to those people who choose to entertain the people they live amongst; the pitfalls of reaching for ‘fame’ and notoriety before happiness and joy, and how to find peace and acceptance in doing what makes you happy and not what others expect of you- wherever and whatever that may be.

Having created the show with Cath, and with the addition of Andrew Schofield to the team, we’re proud of our little show and we hope you, our sell-out audience, will enjoy seeing what life is like for ‘wannabe’ Bev as she tries to ‘make it’- whatever that means!

Thank for you coming to see us.

WITH SPECIAL THANKS TO: 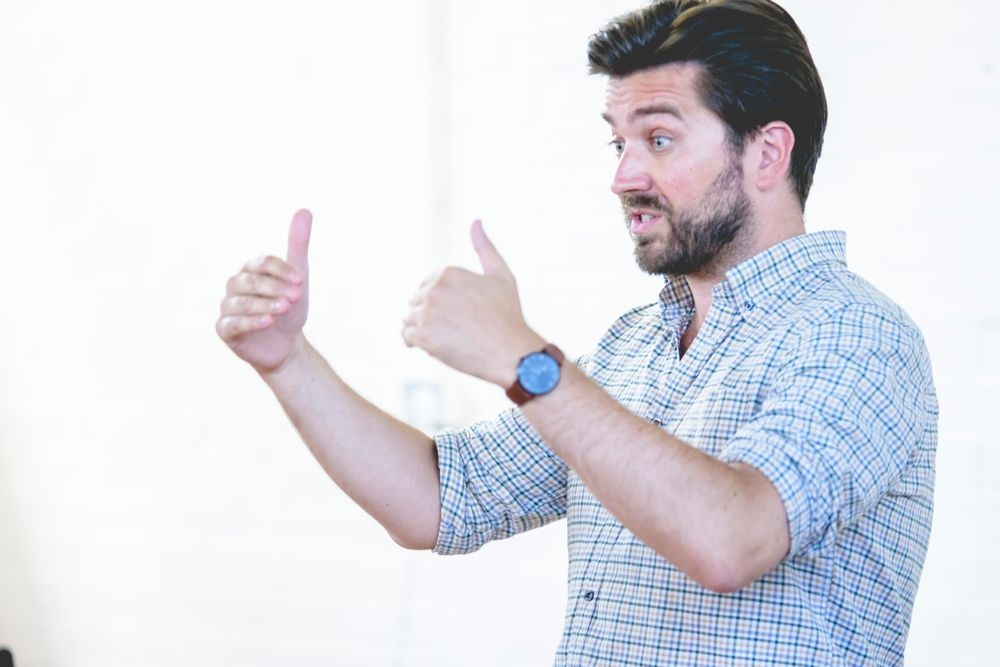 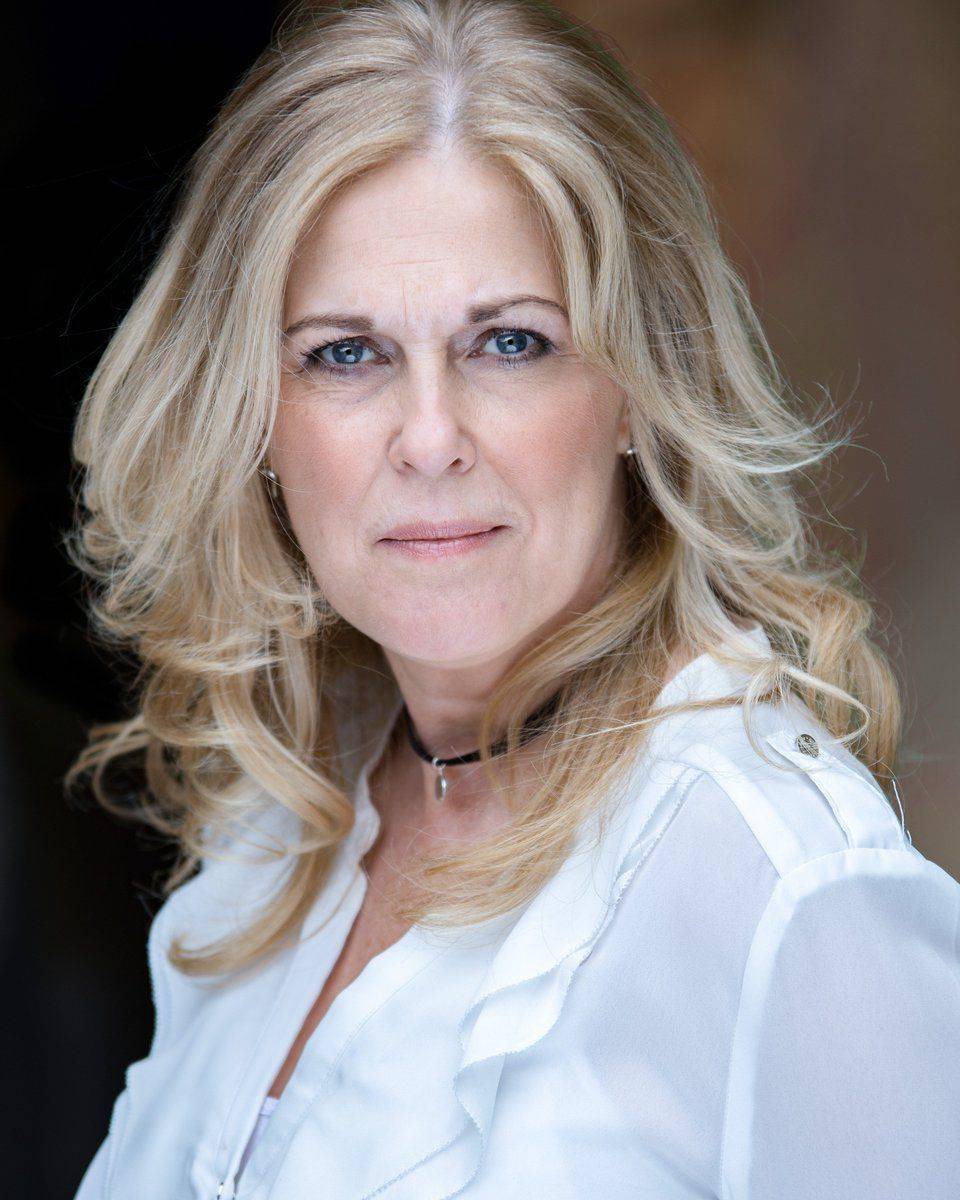 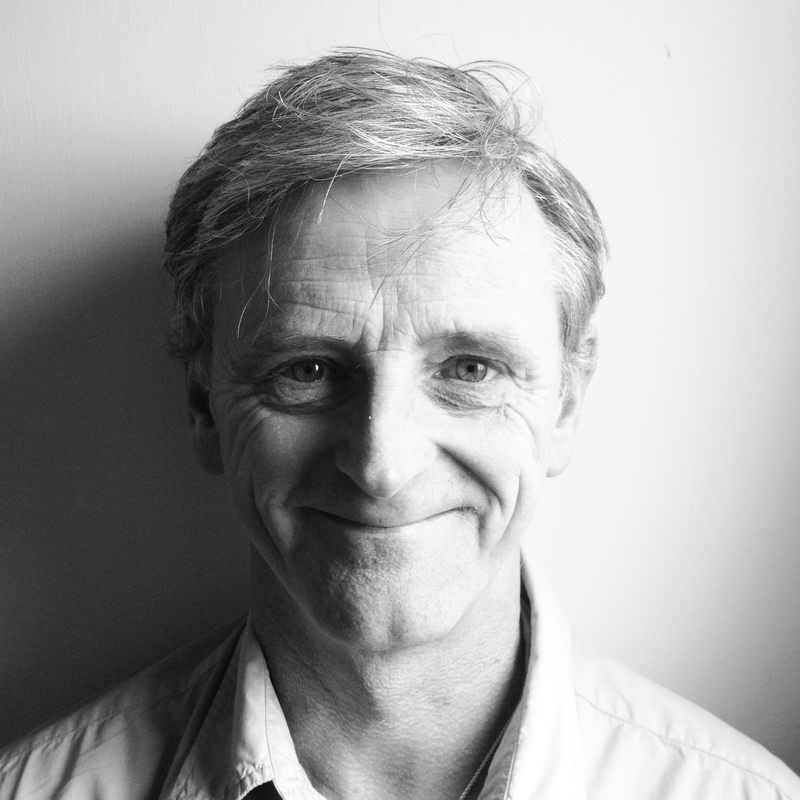 Catherine is a Liverpool-based Actress, Comedian & Writer. She has performed in many theatre tours up and down the country and has appeared in various television roles over the years- from Waterfront Beat for the BBC, Paramount Comedy’s Takeover TV, as well as Crimewatch – where she was eventually caught and served nine years. Cath has also shot numerous short films, as well as appearing in the feature, Be all & End All, for Whatever Films, and Coronation Street.

She started to work on the comedy circuit back in 2015 and quickly started to make a name for herself throughout different venues across the country, particularly in Manchester & London. She can also be found hosting the sell-out night "Ya Nan's Big Quiz".

She first appeared at The Royal Court in Dave Kirby's Hit Comedy, "Lost Soul ", then she went onto star in Gerry Linford's "Miracle on Great Homer Street." and then "Lost Soul 2". 'Bev' made her debut downstairs in the intimate Royal Court Studio space to a sell-out audience in 2018. Co-written and directed by Stephen Fletcher.

Andrew has appeared in Blood Brothers in 1983 at the Liverpool Playhouse, and in the subsequent transfer to the Lyric Theatre in London's West End. He also appeared as George in Of Mice And Men at The Old Vic, London in 2005.

Theatre credits include: Brick up the Mersey Tunnels as Dickie Lewis; Smigger in Lost Soul in 2007 and 2008; Brian in Good Golly Miss Molly; Moey in the Alan Bleasdale comedy On The Ledge; Paul Sheldon in Misery; the Traveller in Eight Miles High; Danny in Council Depot Blues; Joe in Night Collar, JJ in The Flags and Mr Briggs in Our Day Out – The Musical. He performed all of these roles at The Royal Court Theatre, Liverpool.

Since then he has appeared in A Life in the Theatre, The Sunshine Boys and Mam I'm 'ere (Life in Theatre Productions); Dreaming of a Barry White Christmas (Echo Arena) Royal Court Selection Box, Ellen and Rigby, The Scoiuse Sleeping Beauty (Liverpool's Royal Court).

TV credits include: Scully in Alan Bleasdale's Scully. He has also appeared in three more Bleasdale series, as Peter Granville in GBH in 1991, Jake's Progress in 1995, and in Melissa in 1997. Other TV credits include: Maisie Raine, Sharpe, Murphy's Law, Boys from the Blackstuff, The Liverpool Nativity, 15 minutes that shook the World, Cilla, Moving On, Loco, Tin Star, Help.

Stephen is a Liverpool-based actor, writer, producer and director.

Since graduation from The Liverpool Institute for Performing Arts (LIPA), he has appeared in a number of projects on stage, including work at The Donmar Warehouse, West End, The Old Vic, across UK Tours and at The National Theatre. He has also appeared in a number of TV and VoiceOver roles. Stephen was heavily involved with Liverpool’s programme of events for the European Capital of Culture celebrations in 2008, as well as becoming a cultural ambassador for the city.

He is also Producer of his own Theatre Company, Life In Theatre Productions, aiming to create good quality shows at affordable prices, giving work to local actors and practitioners. All his productions have been staged without funding, performed across a number of different theatres and site-specific venues throughout the city, reaching a combined audience of over 50,000 people, largely due to his self-penned, disco-spoof musical, Mam! I’m ‘ere!

As Director, his work includes- A Life in The Theatre, The Sunshine Boys, The Pop-Up Panto, Pete Price is Dead, Ellen and Rigby, NHS The Musical (Theatre Royal, Plymouth), The Scouse Sleeping Beauty, and The Royal Court Selection Box. He also worked as Artistic Advisor for The Liverpool Everyman Playhouse and is currently developing a new musical for Theatre Royal, Plymouth. For more information, visit his website HERE

HOW MAKING IT WAS MADE...

The character of Bev was born in 2017, during a bingo night in an underground hotel bar in Liverpool.

Catherine Rice and Stephen Fletcher had met a few years back when Cath was co-running the Liverpool Actor's Studio on Seel Street when Life in Theatre staged The Last 5 years there.

"We knew there was something more to get from Bev", says Cath, "so we set about exploring different stories for her to tell and different ways of telling them."

"We created a short-film for BAFTA, gaining interest and positive feedback, developed a sell-out one-woman show for The Royal Court studio with a softer and warmer Bev at its heart, and used that to develop a new Christmas show, OUR BEV'S CHRISTMAS CRACKER." says Stephen.

During lockdown, Stephen and Cath co-wrote and filmed 10 x 4 minute films for Bev's Youtube channel. Across social media they became a source of light relief for our audience and a way of taking stock during a turbulent time for so many people. They have been viewed on Facebook by more than 40,000 people.

In them, Bev contemplated life as an actor after COVID, and stared down the reality of things never being the same. She was everything from compere at a Spanish holiday resort, going for male roles and auditions, considered for CATS the musical, and even volunteered to open the Liverpool zip-wire while ​championing the cause of Black Lives Matter and Liverpool's own history.

Completely unsubsidised, Cath and Stephen used this time as a way of honing their writing skills and keeping their creativity flowing during such a dormant period in the industry.

What they created was something they are proud of and will serve as a valuable reference point on life during the lockdown, albeit a comedic one, in years to come.

Visit our YouTube channel to see the full 10 films, and some surprise special guest stars in our finale! 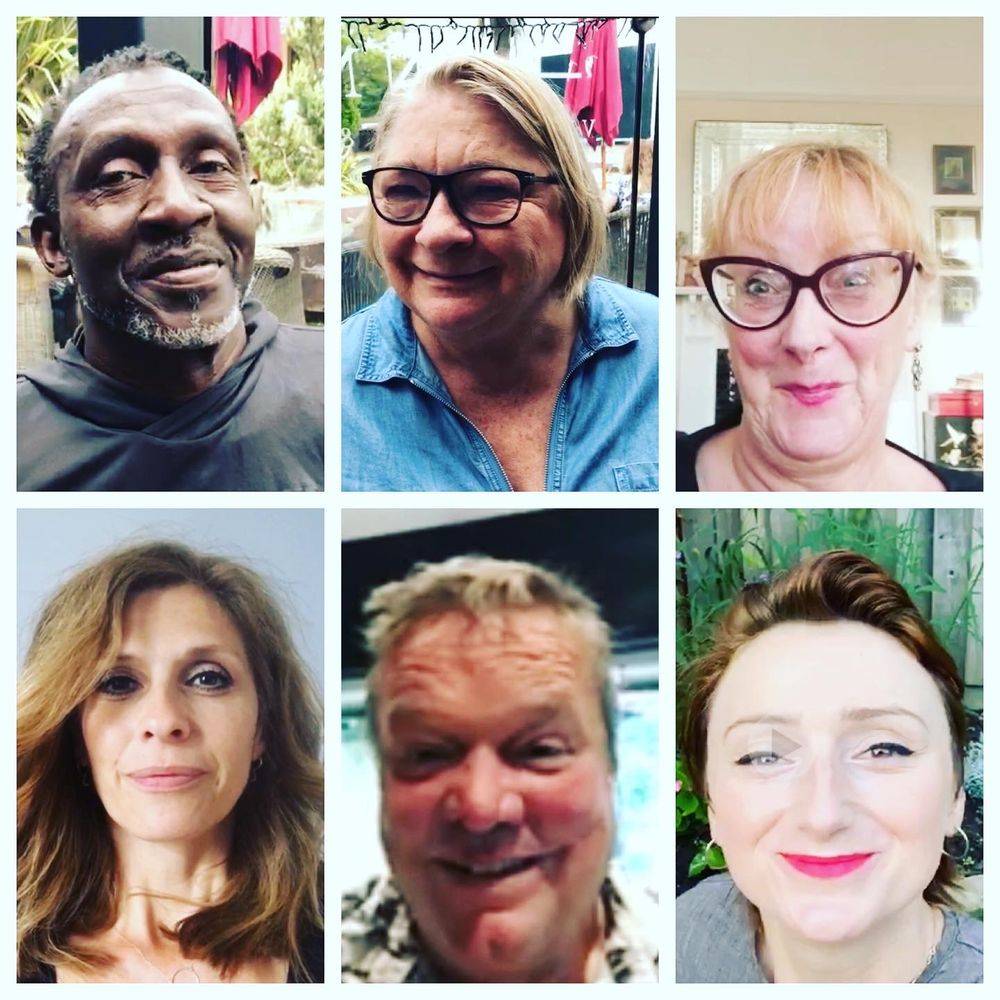 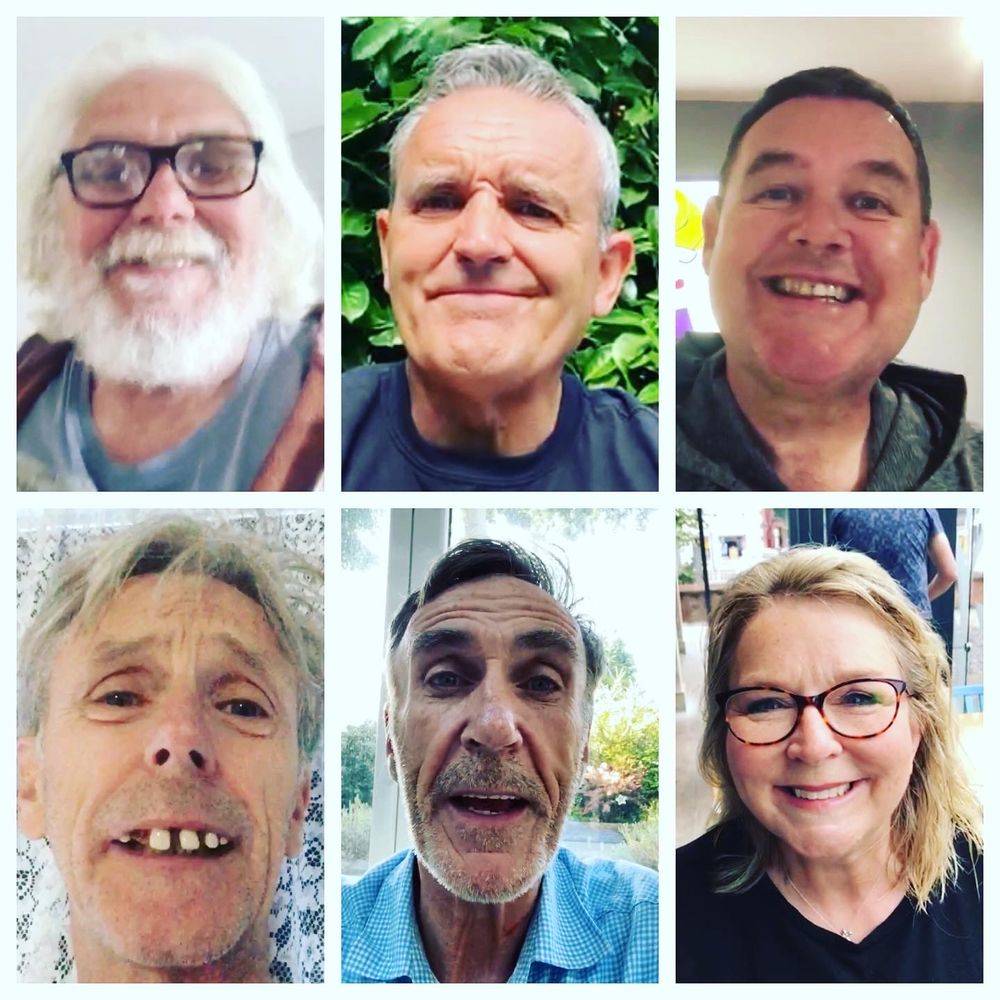 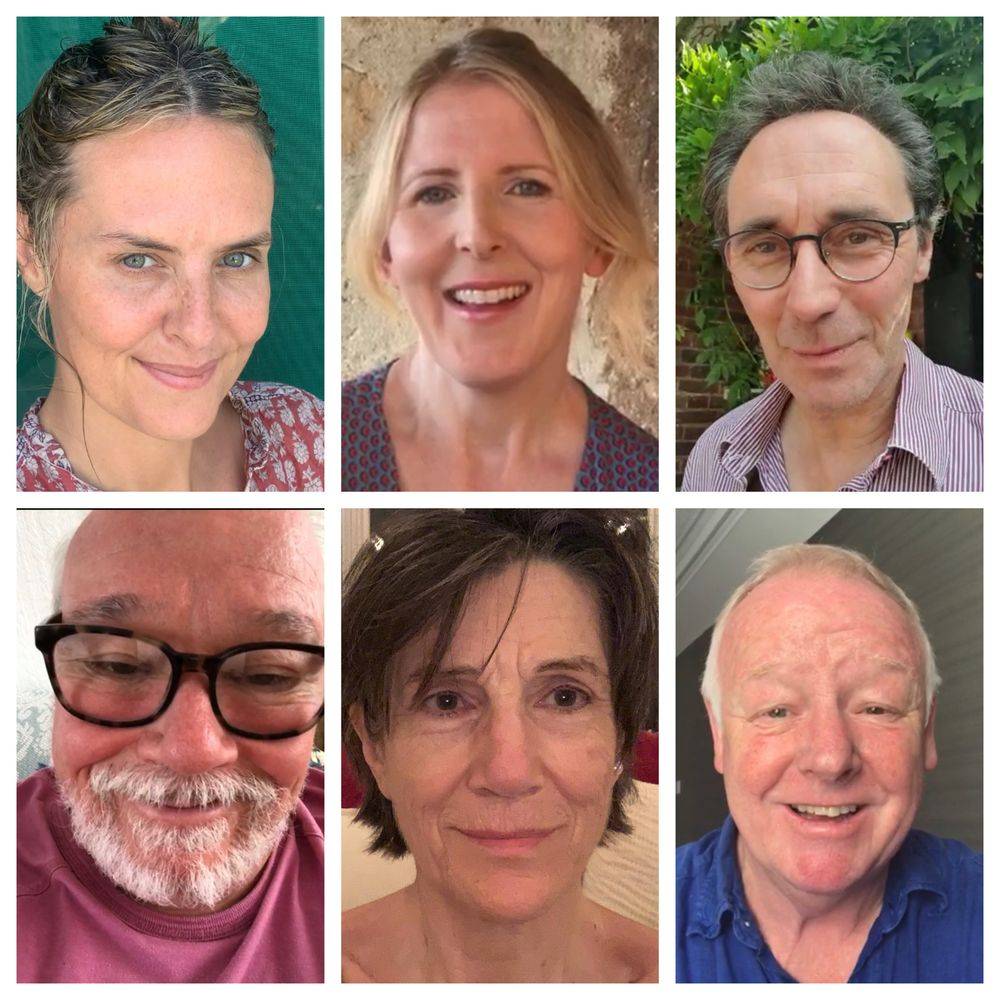 ​BEV'S BUSKING BONANZA was mounted as part of Liverpool's Without Walls festival, bringing live entertainment to the streets after the pandemic lockdown.

L​ife in Theatre in association with Catherine Rice were awarded funding from Liverpool City Council, guaranteeing buskers from the city region a wage, during two pop-up stages on August Bank Holiday, 2020.

Mandolin players, drummers, singers, children, pianists, songwriters, guitarists and more all stepped up to the mic, performing some of their favourite songs, and for many this was the first time they had performed in 6 months, since the start of lockdown.

It was received well with passing members of the public, who all engaged with the event, with some people even putting money down for the performers.

Highlights included a local boy (Adam Cusak) raising money for his school funding, a young girl (Jess MacDonald) singing her lockdown song, Rainbow of Love, which was a charity single for the NHS, and a local drummer (Colin Lamont) who pulled a huge crowd and has performed all over the world. 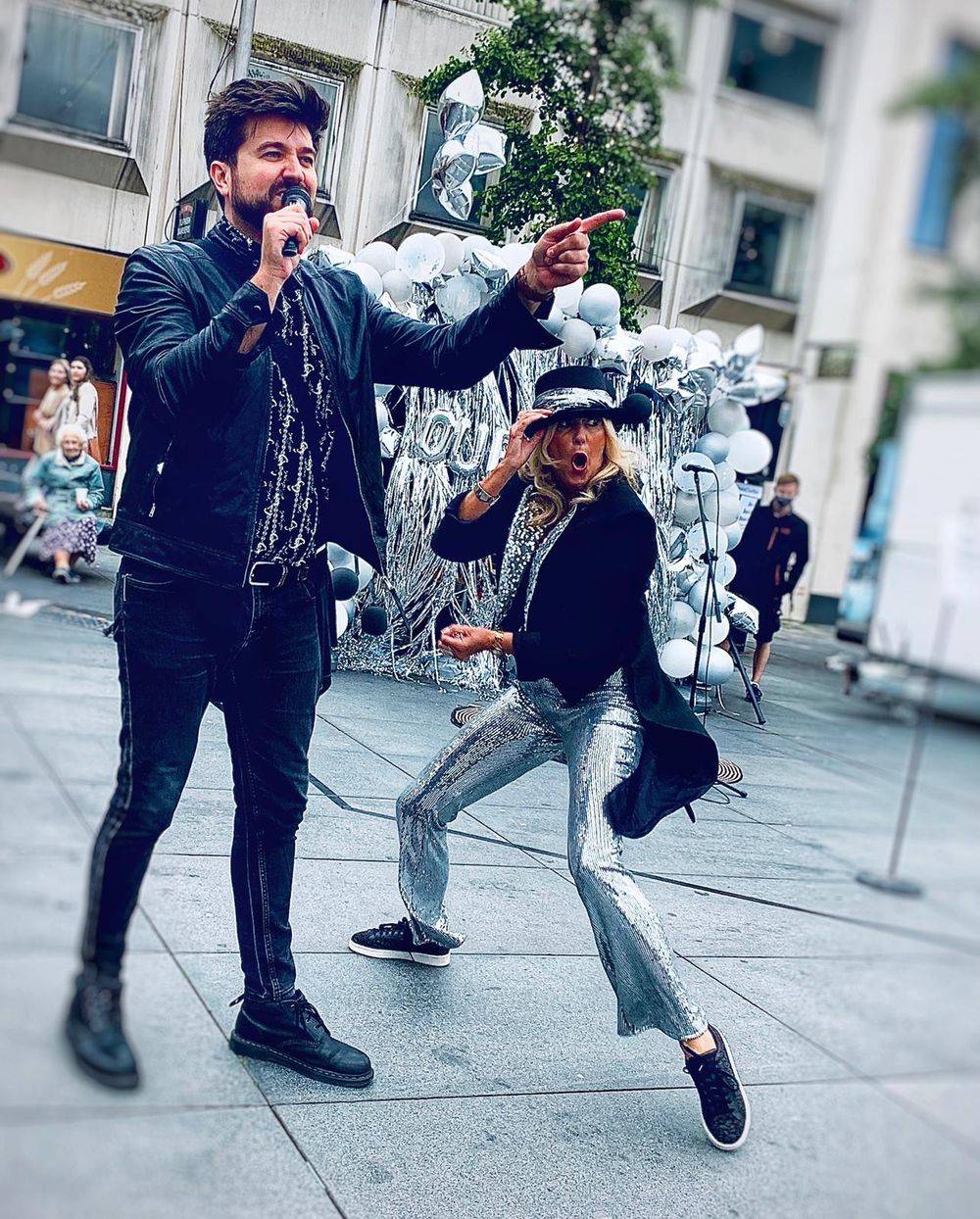 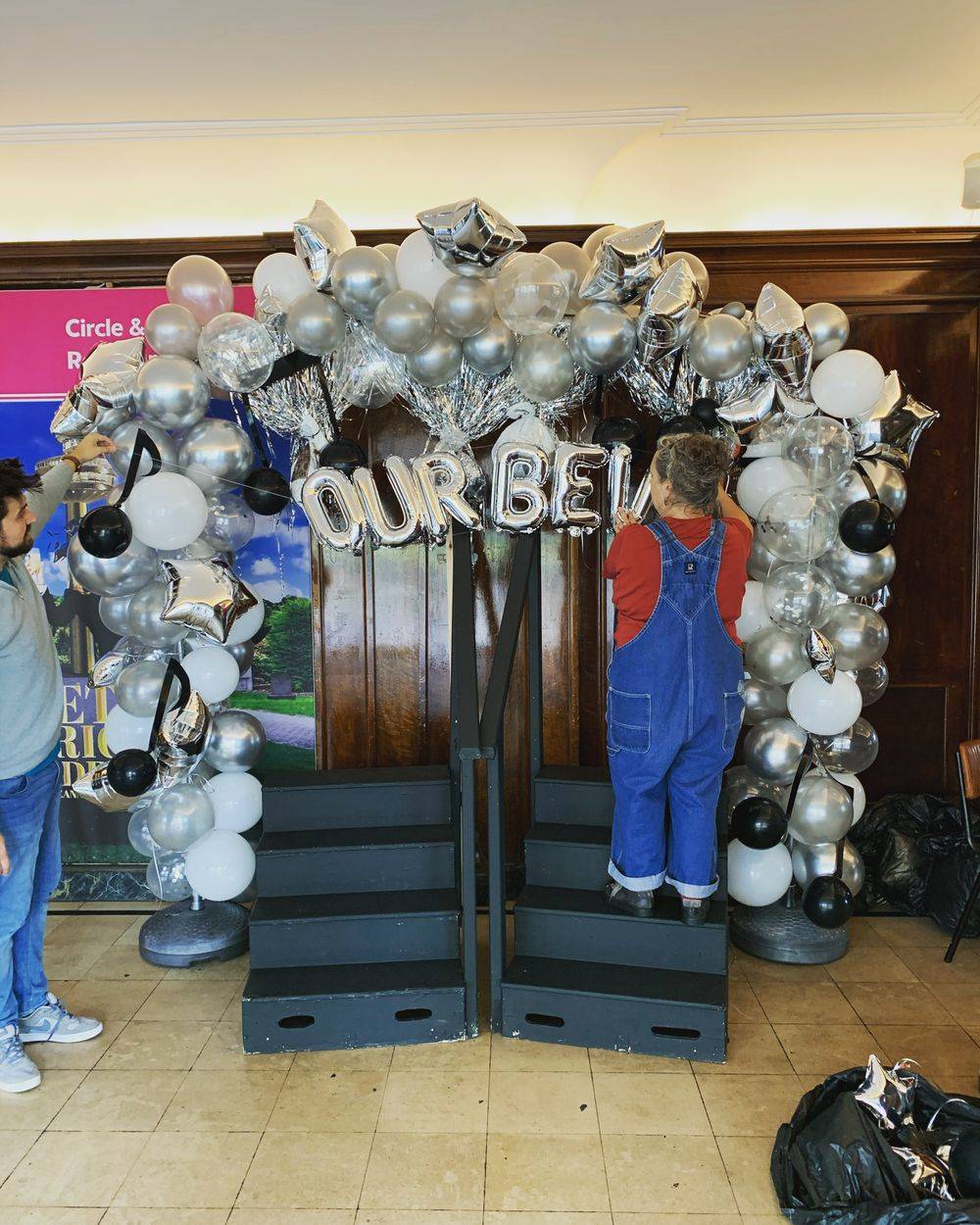 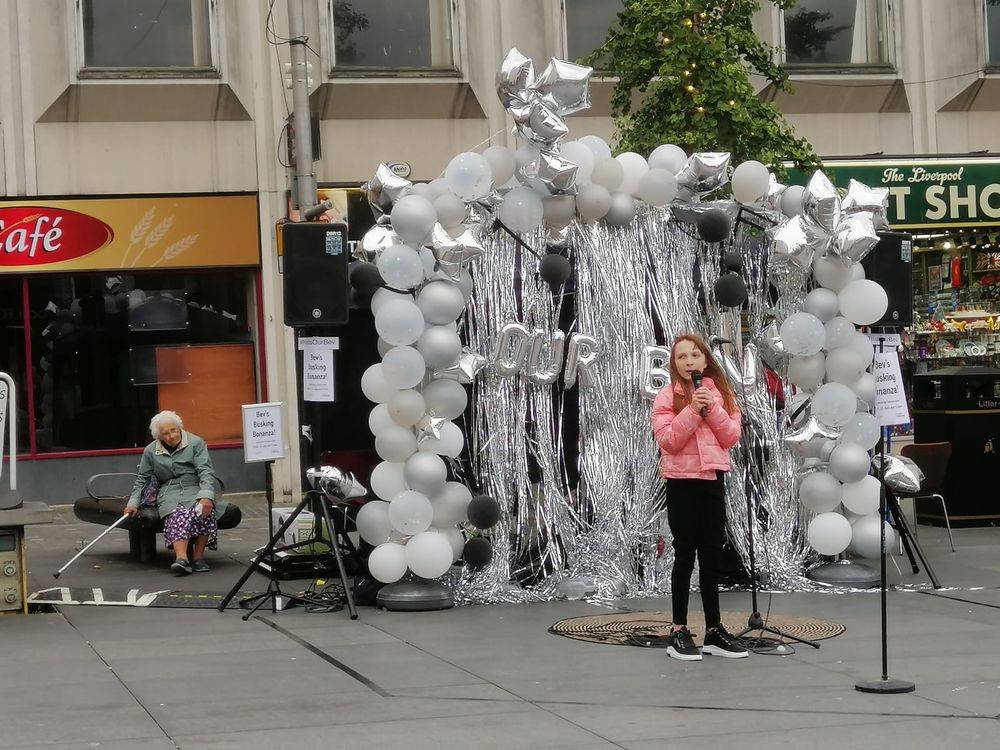 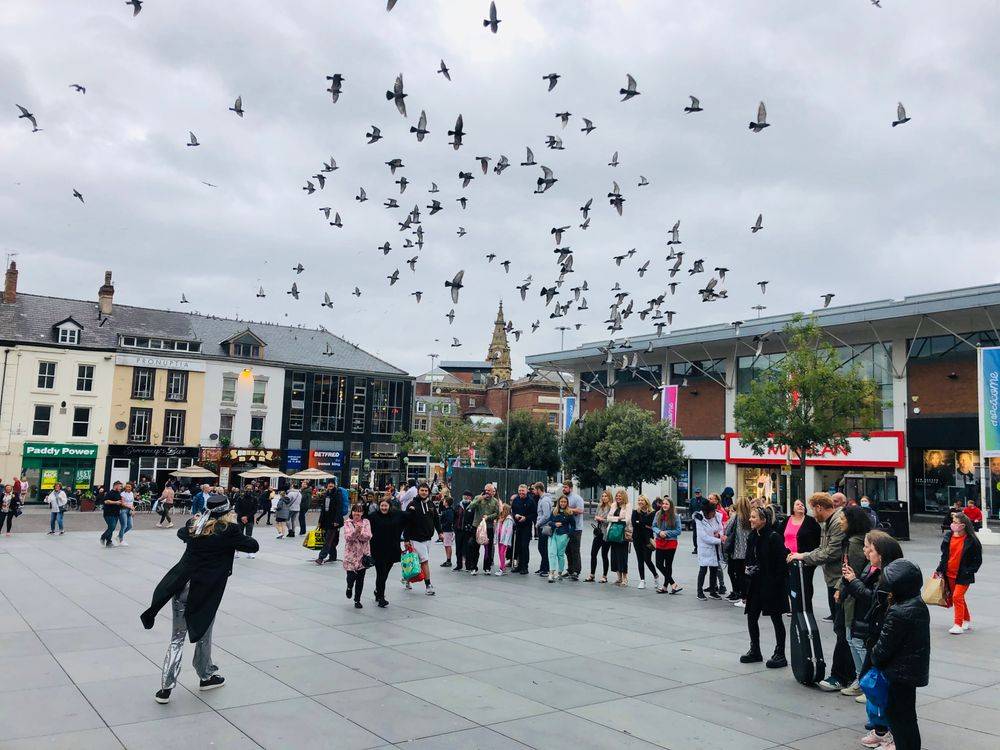 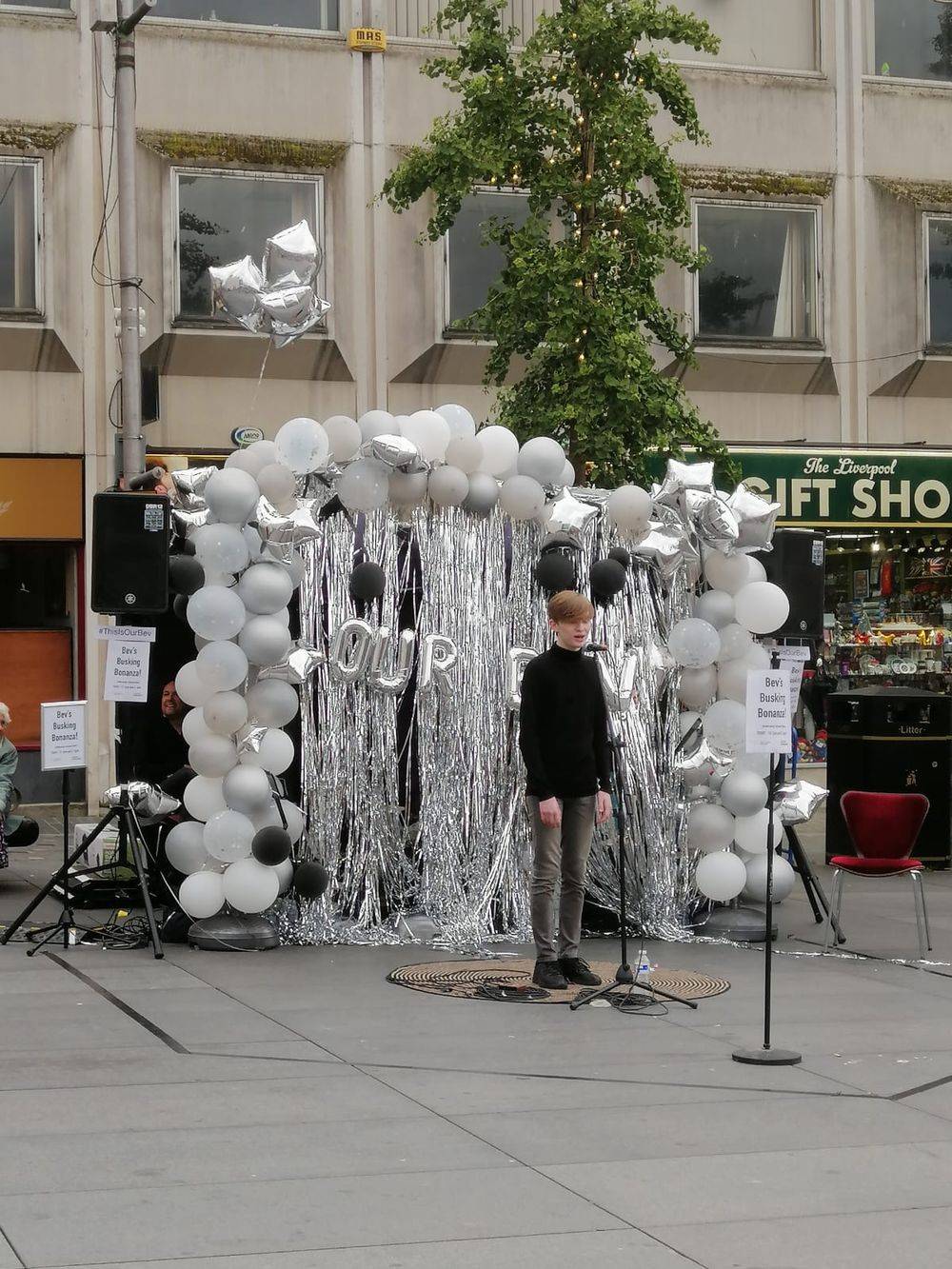 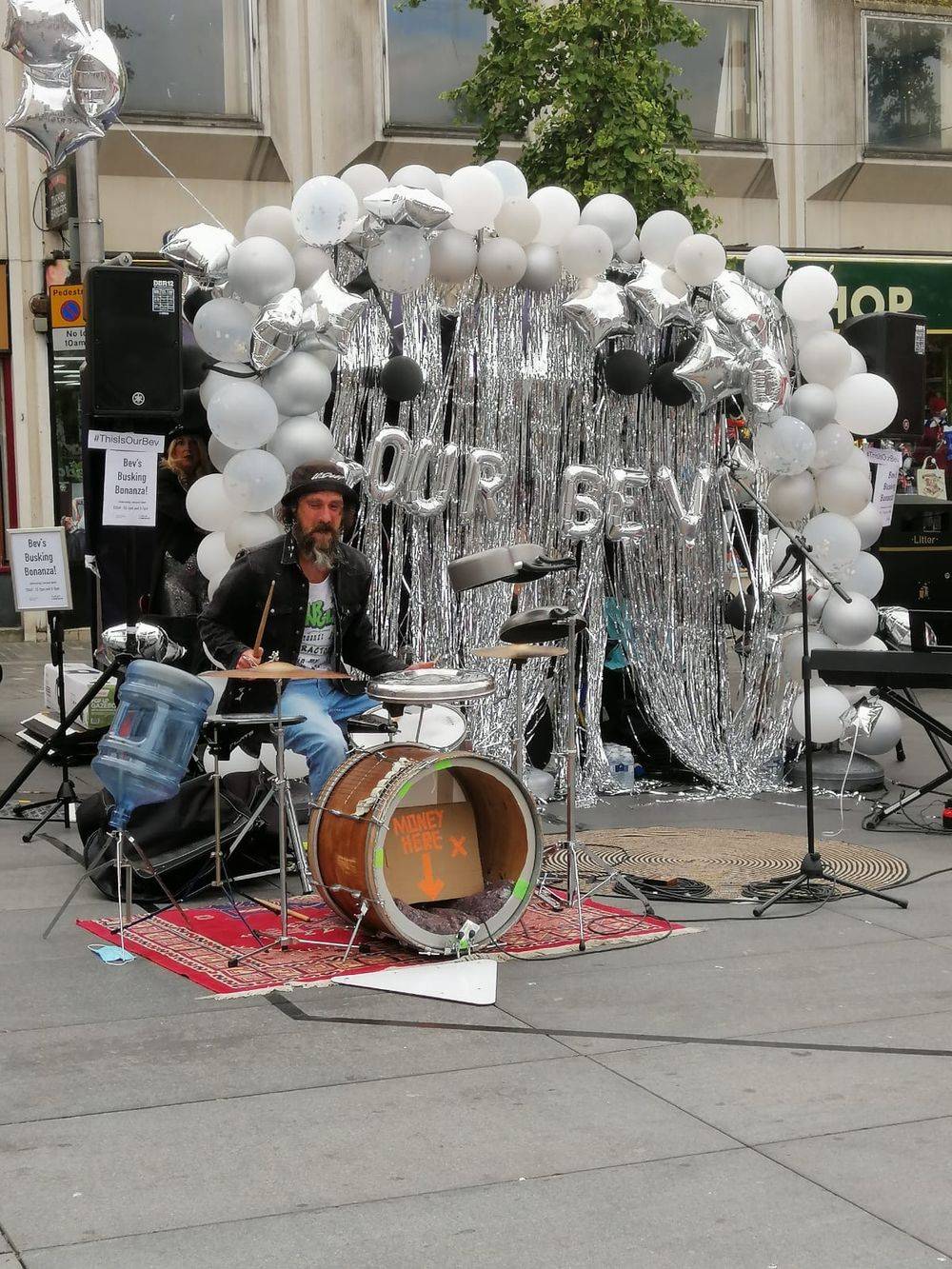 Our Bev is an award-winning, two-act, comedy drama. Following a one-night scratch show of this loveable local character, Bev returned to The Royal Court Studio at the end of 2018, playing to sell-out crowds, to great critical acclaim and a surprise award for one of the best theatre pieces of the year.

Over the course of one evening backstage, we are transported to film sets, audition rooms and holiday camps as ever-ambitious singer and actor, Bev, takes us through her last 30 years in show business.

​OUR BEV was produced by Life in Theatre, in association with The Royal Court.

Written by- Cath and Stephen 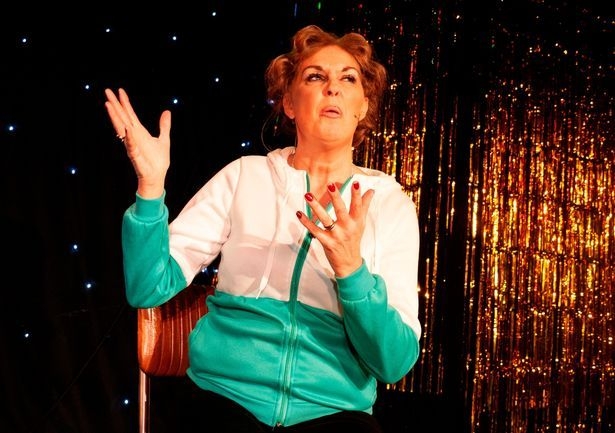 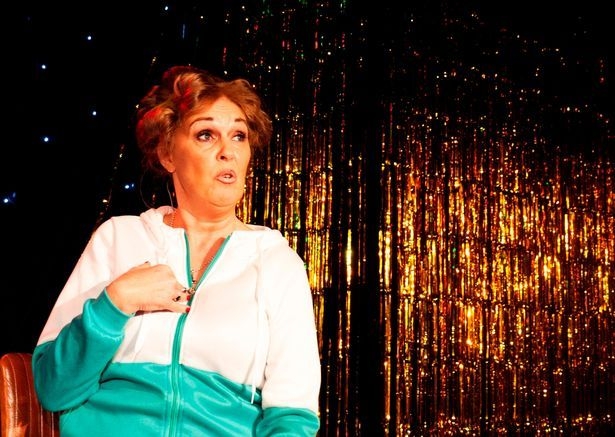 REVIEW: Catherine ​Rice shines as the club singer looking to the stars while lugging her own speakers around 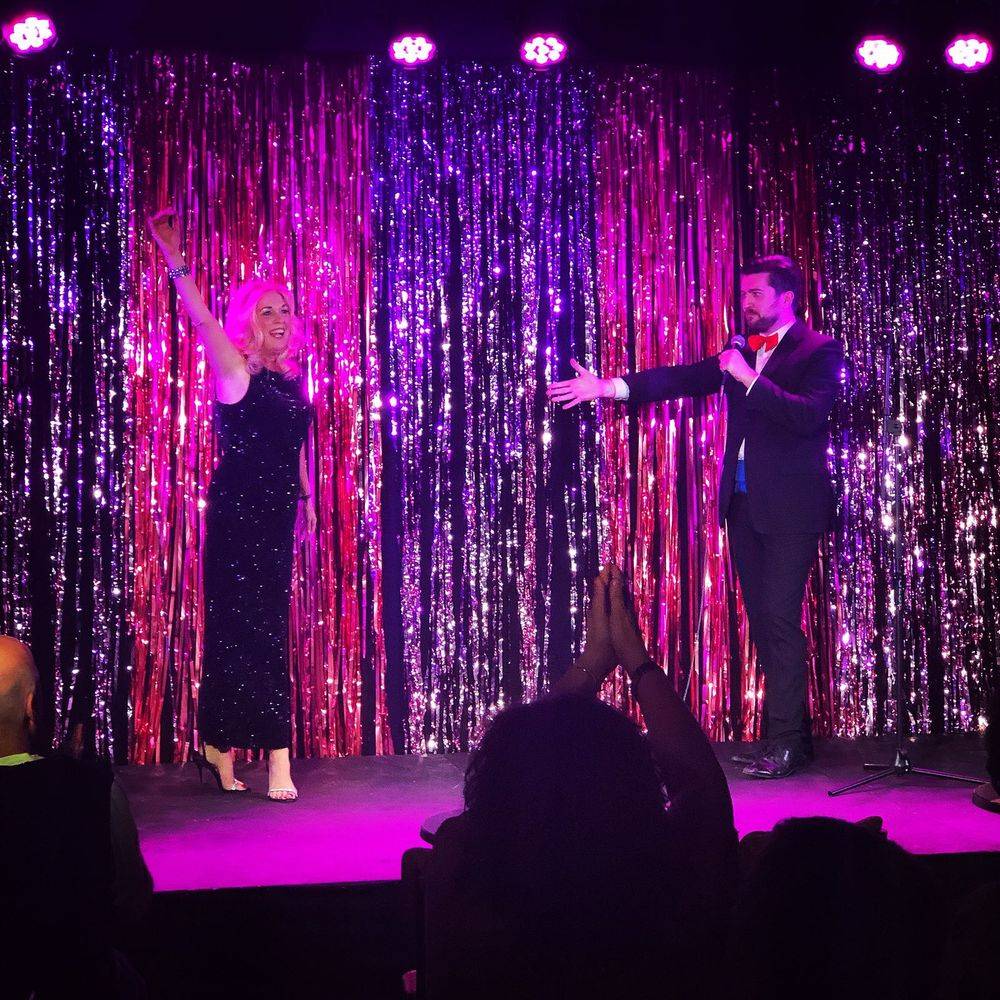 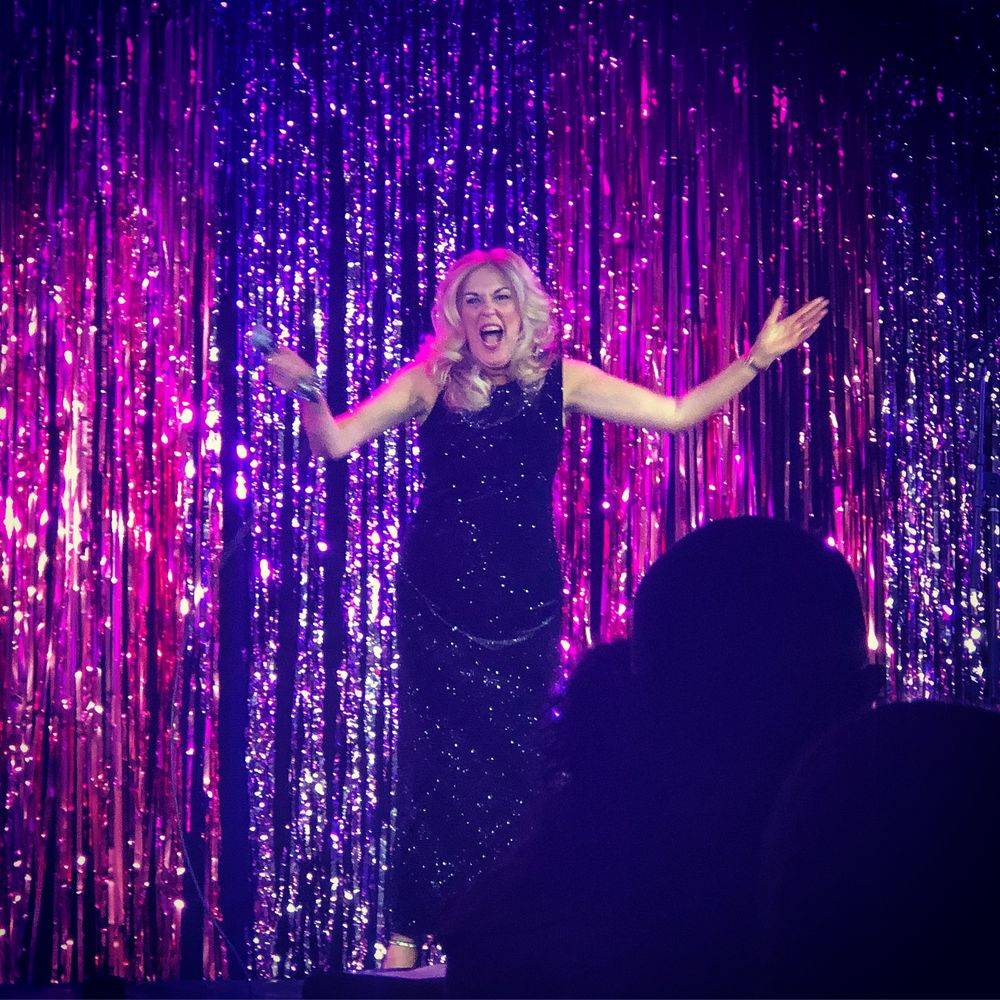 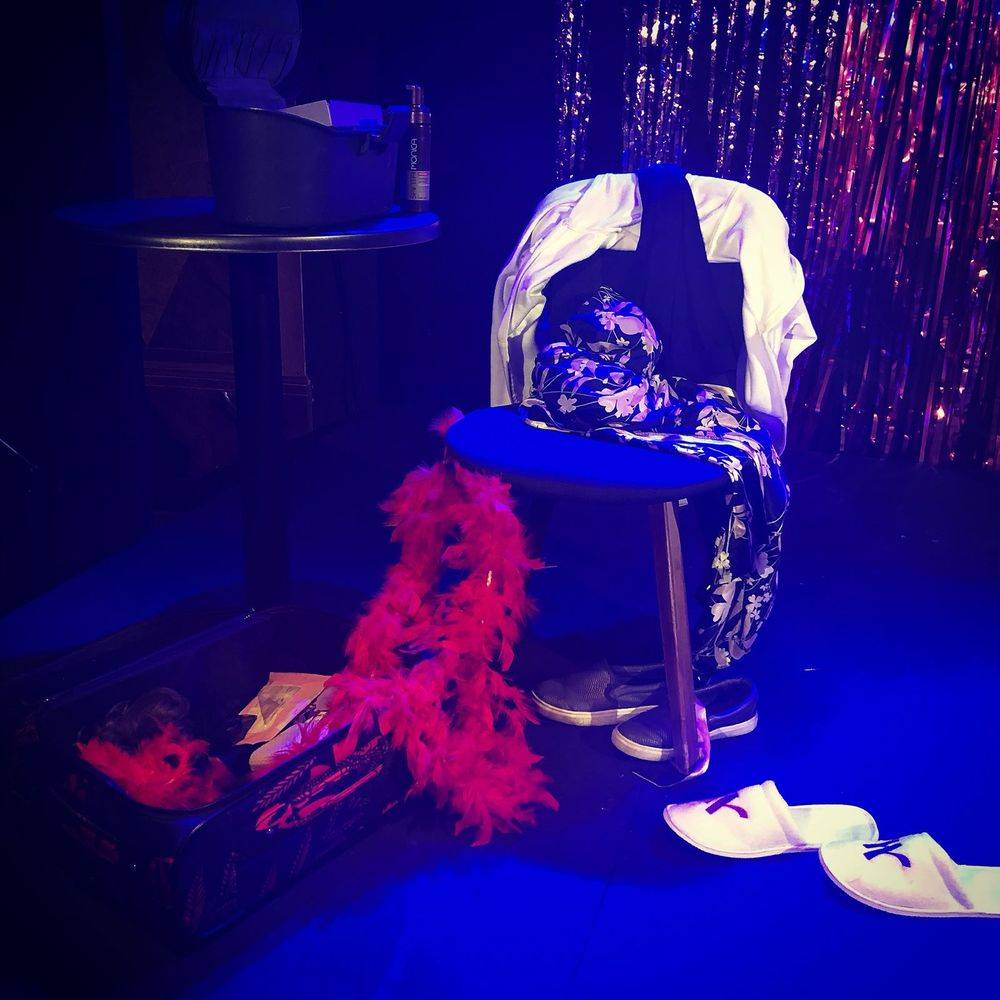